Have you noticed? Lately I’m compelled to add exclamation points to my headlines. Maybe I’m just that excited about the holidays. In this case, the reason was to make it ‘sound’ like a short-order cook calling out from the kitchen.

Big batch of stock from turkey and chicken bones – Chickey? Turken? Whatever the name, it is yummy and we’ve got a lot of it. I’m thinking butternut squash risotto, because wait until you see the size of the butternut squash I bought at — surprise, not! — Costco!

The original plan was to make a honkin’ big batch of Pasta alla Vecchia Bettolana using the jumbo can of plum tomatoes. But then stuffed green peppers sounded good, too, what with the green peppers being garden fresh. That should leave just the right amount tomatoes for standard-issue spaghetti sauce. Fortunately, this last stroke of brilliance hit when standing at the meat counter so a pound of the good Italian sausage made it home without the need for a second trip. And the four cans of tomato sauce in the pantry could be called into action.

The results: Eight meals of Pasta alla Vecchia Bettolana, ditto spaghetti sauce, now in the freezer, plus stuffing for four meals of stuffed green peppers on hand. One or two less meals to plan each week for a goodly while. Zero cans of tomato anything in the pantry. 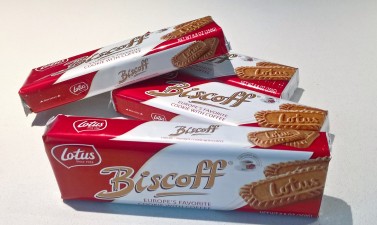 Here are those darn cookies again! Couldn’t find them the last two trips to Costo, so stopped by Customer Service to find out what gives.

Horrors! I think the only person more disappointed than me to find out Costco no longer stocks Biscoff was the woman behind the counter. Apparently she’s a bigger fan. She just kept saying this doesn’t mean Costco won’t stock them again. Hope. . .

Once the shock wore off, I recalled hearing that Target carries them. Sure enough. Better price than anywhere on the interwebs, so last Sunday with an all-purpose discount coupon I stocked up.

But who told me that Target stocked them? I need to recall so I know whom to thank!

This year’s tomato harvest is dismal. Pathetic even.

Last year the output was smaller than usual so we figured it was time for a new plan. Probably that blight thing, so give up on planting tomatoes in the garden for a year. Try pots on the deck. Fresh tomatoes just steps from the back door. Not so much. Mostly dry, hot summer punctuated by periods of deluge. Plants either too dry (even watering multiple times a day) or too wet.

What to do about spaghetti sauce!

Costco to the rescue! 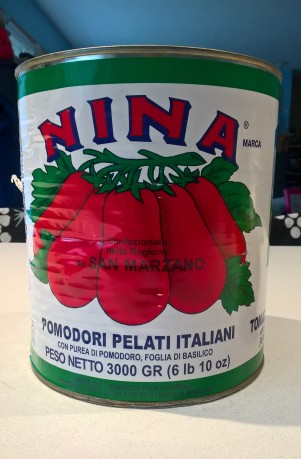 This has to be the solution, right?

Then The Splendid Table re-posts a story on canned tomatoes. Clearly, I’ve been dupped by a PR scam. But I’m certainly not going to throw away this jumbo can of tomatoes.

Maybe a little extra vodka in the Pasta alla Vecchia Bettola will cover any shortcomings. And maybe put some of that vodka in a glass rather than in the sauce. . .

Rarely have I looked forward to fall with such unabashed desperation. Not a hot weather person, I.

So last week when we walked from the heat of the day into the concrete coolness of Costco and I saw the paperwhites, well, I almost hugged the display. Thank goodness I didn’t. How embarrassing would that be?

My second reaction was the headline for this post popping into my head, along with The Iceman Cometh, which would be the old entertainment reference used before Game of Thrones. Haven’t seen either, actually.

At least all this only happened in my head. Can you imagine me hugging bags of bulbs shouting random cold-weather references at the Costco entrance? Why did you say yes, you could imagine that?

Figured it was time to load up on winter food, too. Hello Panko Chicken Nuggets, pass the hot sauce!

Then, just a couple of days later, came the long-range weather forecast from The Old Farmer’s Almanac (via Elle Decor. . . whatever). Thinking cool thoughts. . .

Please excuse me, I need to go in my closet and stare longingly at my sweaters. It’s still too hot and muggy to even touch them.

Smoked and Slow — and Just Slow

Back in the day, some time in early spring, I would buy a package of two humongous pork shoulders and make porchetta from a recipe that ran in The Washington Post. Fennel seed, rosemary, crushed black peppercorns, and a few more seasonings — oh the flavor. Divvied up and frozen, we ate well until late fall on a one-time cooking event. The recipe includes a good BBQ-style sauce so pulled pork sandwiches were a summer staple.

If memory serves, the last time I made it, the meat was a bit tough. And slow-cooking, to state the obvious, eats up the whole day. Finally decided it wasn’t worth the effort.

Recently the hubs was watching Steven Raichlen smoke pork shoulder and, well, before you can say ‘add the wood chips,’ there’s a familiar package of meat on the counter. He went for the smoking method (on our tiny Smokey Joe Weber grill) and I used the oven method.

Mine cooked faster by more than an hour, but speed doesn’t win much here. The smoked shoulder (above) was noticeably more tender. We’ve been adding the BBQ sauce and enjoying pulled pork sandwiches. The hubs even tops it with Asian slaw – a little odd, perhaps, but it works.The flavor is stronger, more in-your-face, than the porchetta.

That flavor, flavor, flavor of the porchetta. I am definitely not a supertaster; generally the stronger the flavor, the better I like a food. This porchetta is an exception. It is quieter tasting (as opposed to mild), best served on its own. How to keep that flavor and get the meat tender. We rewatched Mr. Raichlen’s cooking technique, searched the interwebs, and decided (without debate) to lower the cooking temp (how low is still under debate), increase the cooking time and try again.

Now all we have to do is finish these two cuts first. . . It could be awhile.

Went to a soiree last Saturday evening at a friend’s swanky new home. In the email invite exchange, he said the savouries were covered and I could bring a sweet if desired, but not required. We’re both Midwesterners so no invitation comes without an offer to bring something, and a host never insists guests bring anything — but we both know that bringing something is Official Midwestern Policy.

The day before, in our fridge was a Costco container of blueberries. The plan was to make blueberry muffins, experiment with carbonated blueberries (saw this on New Scandinavian Cooking), and eat the rest in yogurt.

Paragraphs 1 and 2 were to be separate events. But when I opened the binder of misc. baking recipes, on the flip side of a recipe sleeve was Blueberry Crumble Bars. Hmmmm. So I broke the first rule of cooking for guests: I used a new recipe. And I upsized it. The recipe called for a jelly roll pan of smaller dimensions than a standard cookie sheet. So I just made a generous smidge more of shortbread crust, gooey filling, and strudel topping. Plus, I’d already started eating the blueberries in my yogurt, so I added frozen Maine wild blueberries (in-house stock for blueberry muffins and blueberry buckwheat pancakes) to cover the deficit.

The result was pretty terrific, and I don’t have only my opinion to back that up. The hubs, the hosts, and the blueberry-fan guests were also impressed. I may just run with scissors more often.

Brittany Stinson weighs in: “I don’t know if many applicants usually explore the mundane in their essays—that seems to have taken a lot of people by surprise.”

She was accepted to five Ivy League schools and her essay is on shopping at Costco with her mom. Quartz did a pretty darn good story about it.