Urban Legends of the Trail

I hear tell a tale of two folks and a dog who done wandered off the paved trail one day and pert’ near disappeared. It was a mighty fine adventure that took ’em ’bout an hour, or possibly much, much longer, to find their way back to civilization.

Seems it all started when them folks and the pup got on the trail only to be  confronted by two unleashed dogs whose disinterested humans followed a goodly distance behind. Leashes, people! Leashes! What in tarnation is so difficult about leashes?! With a large barking labradoodle headed right at ’em, well, the easiest thing to do was head up the dirt trail before things got ugly. Couldn’t be far before that trail intersected with the pavement again; they’d seen other folks re-enter the main trail with their dogs lots of times.

So they wandered up the hill and within a few minutes were surprised at how far away from civilization they felt. The constant presence of street noise on the main trail disappeared. The trail went up and it went down — steeply. It switched back and forth repeatedly to get to the bottom of a ravine, then repeated the process to get back to high ground. And the trail slanted deeply sideways, putting one precariously close to a rapid, tumbling descent with every step. After the third or fourth ravine, well, only the pup was still running strong.Yes, the mini fjords of the Midwest can be taxing on human and, eventually, beast.

And the lady adventurer, well, not having planned on this excursion, quickly realized these were the wrong boots. Oh, they had plenty of much-needed tread, but they were heavy. And while the thin socks were warm enough, her feet slid inside the boots requiring extra effort for each step. She cursed not being more diligent about yoga for the flexibility needed for grabbing branches and taking high steps up, and the balance for taking sliding steps down. But she did become reacquainted with her glute muscles.

Figurin’ the rescue squad might find only their cell phones, she wanted to take more pictures. But her main goal was not going arse over tea kettle down the hillside.

Also with surprising quickness, the nearby rich kids academy (because rich kids don’t go to a school), and the parents’ fancy homes had disappeared from view; all the trio of accidental adventurers saw were trees and snow. And snow and trees. After cresting more than a half dozen hills, houses blessedly reappeared. But these weren’t the same houses visible from the paved trail. And the railroad tracks were nowhere to be seen. Where exactly they were was, and remains, a mystery.

At this point, the couple drew on the wisdom they had gained from many years of riding bike trails: The trail is just as long back to the car as it is going out — only you’ve got less energy. They turned around. Funny thing, though, it was a cloudy day so they didn’t really know which direction they were headed, and pretty much every snow-covered tree looks like the next so every direction looked the same. And there were a.lot. of trees. As well, they had made several choices at Ys along the way, which had to be properly re-chosen on the way back.

Why just look at this Google Earth pic – you can’t even see the dirt trails! 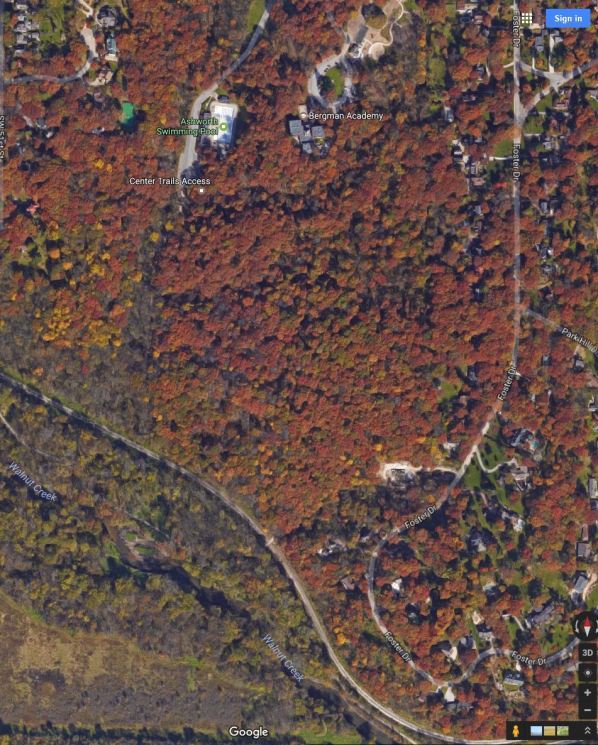 Now even the pup was showing some stress. She’d been wary of the narrow bridges crossing the fingerling creeks on the way out, and was even less inclined to cross them on the way back. And the snow was starting to turn to ice balls between the pads of her paws; her people not thinking she’d need Musher’s Secret on this excursion, left her paws bare. Problem is, that paw problem only gets worse over time and the party came to halt several times on the steep slopes to clean the pup’s paws.

‘Bout now, the fun aspect of this adventure was wearin’ pretty thin. But the car doesn’t get any closer by whining, so they trekked on. First the chimney of the academy appeared through the trees. And soon the Rock of Gibraltar came into view. OK, it was a rough tree stump that reminded the gentleman adventurer of the Rock of Gibraltar. Sorta.

That was funny on the way out, but it was likely delirium talkin’ on the way back. Soon the car – with its heated seats – came into view. Rarely is a sight so devine. With only themselves as witnesses to these events, the couple and the pup headed home.

So how do I know this tale is true? Well, I listened to them retell it to each other with great animation as they stood in line at the donut shop. Seems the lady adventurer was sure she’d used up all her carbs on the adventure and felt it imperative to replenish. The gentleman adventurer indicated he was feeling the same deprivation.