Went to a soiree last Saturday evening at a friend’s swanky new home. In the email invite exchange, he said the savouries were covered and I could bring a sweet if desired, but not required. We’re both Midwesterners so no invitation comes without an offer to bring something, and a host never insists guests bring anything — but we both know that bringing something is Official Midwestern Policy.

The day before, in our fridge was a Costco container of blueberries. The plan was to make blueberry muffins, experiment with carbonated blueberries (saw this on New Scandinavian Cooking), and eat the rest in yogurt.

Paragraphs 1 and 2 were to be separate events. But when I opened the binder of misc. baking recipes, on the flip side of a recipe sleeve was Blueberry Crumble Bars. Hmmmm. So I broke the first rule of cooking for guests: I used a new recipe. And I upsized it. The recipe called for a jelly roll pan of smaller dimensions than a standard cookie sheet. So I just made a generous smidge more of shortbread crust, gooey filling, and strudel topping. Plus, I’d already started eating the blueberries in my yogurt, so I added frozen Maine wild blueberries (in-house stock for blueberry muffins and blueberry buckwheat pancakes) to cover the deficit. 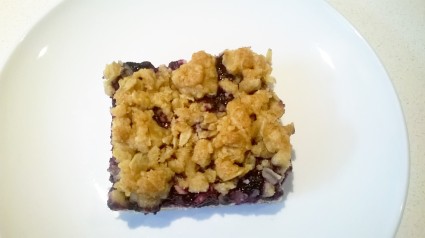 The result was pretty terrific, and I don’t have only my opinion to back that up. The hubs, the hosts, and the blueberry-fan guests were also impressed. I may just run with scissors more often.