Again! Again! The little girl says as she spins the revolving door in the TV commercial. The joy of repetition of a joyful thing. Mostly.

Twice last week I made desserts with a long, dependable history. Both reminded me of the tension-filled joy of cooking. It’s all in the details.

The hubs went off-list at the grocery store. I remembered that you said you wanted bananas, so I bought bananas! He said. Two rules of buying bananas: No more than four, and on the green side. I eat only half at a time (the end of the other half protected with a food hugger), and less-than-ripe bananas have some nutrition stuff that’s really good for you. I remembered the smart thing to do, not the specifics. . . .

Six almost fully ripe bananas were a problem waiting to happen. I dug up an old favorite recipe for banana cake which is actually a blend of two recipes. Here’s what I saw.

I haven’t made this in a long time. First, I accidentally followed the cake recipe, thereby putting in too much flour. Then I proceeded to just guess — reduced the sugar a bit, went generous on the salt and baking soda, added less oatmeal. It worked! Loved the outcome but doubt I could repeat it.

That leads us to the ice cream. 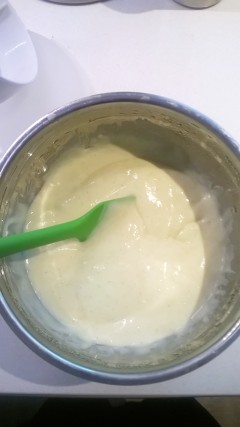 As per my stated goal, we are eating only homemade ice cream this summer — aside from a moment of weakness brought on by a sale of Eskimo Pie Ice Cream Sandwiches.

To trim the calories a little, I substituted 2 percent milk and low-fat cream cheese. The mix was thinner while cooking and for some reason I didn’t simmer it as exuberantly as usual. Chilled it for about 3 hours, anxious to see how it was going to turn out. It churned completely differently than previously — still not super thick after 30 minutes. (This is close to the 20 minute mark; even that is longer than standard.)

After a good freeze, the ice cream turned out much softer but still nicely set. No need to let it warm for a few minutes before serving. The hubs said it was perfect, preferred this. Do it again, again! I would, but I don’t know what exactly caused this consistency. So I proceeded to revert to the old method to see what happened. Harder simmer on the mix, super-cooled overnight. Let it sit at room temp for about 20 minutes before churning. It’s softer than usual, but not the texture of the first batch.

I guess that’s the problem with us creative types — we just hate doing anything the same way twice.