Triumph of the Mundane

(her)Ring in the New Year 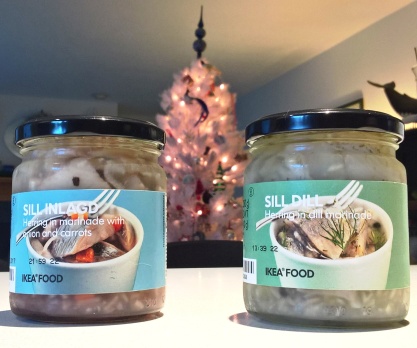 Many good things happened in 2016. Positives notwithstanding, however, the year had a few pretty craptastic events that tainted many of the days. Several unpleasant-if-mundane realities occurred — things that happen to everyone but had an extra layer of, well, crap.

After much deliberation, I have determined the cause to be herring. Specifically, the New Year’s pickled herring.

Eating pickled herring on December 31 and the next day (superstitions only work if you cover all possibilities. . .) is the only New Year’s tradition I have observed without fail since childhood. There’s a little quirky history behind it that I love — acknowledging the uncertainty of the future while hoping for good fortune.

Rewind to the last day of 2015 when I found myself without a jar of pickled herring. Dashed to the closest grocery store. While I couldn’t tell you the name of the brand that’s ubiquitously available, I can tell you it wasn’t stocked at this store. Something told me what was available was inferior, but I bought it anyway. Inferior it was. Mushy, not much flavor, and way too sweet.

Well, look how that turned out.

Determined not to let this unpleasant fate befall another year, I planned and purchased with intent and purpose: A month ahead I took advantage of being near IKEA, cooler in the car.

In the words of Emerson, Lake, and Palmer, “Hallelujah, noel, be it heaven or hell, the Christmas we get we deserve.” Clearly the sentiment extends to the following week’s holiday. And I, for one, am starting 2017 with forethought and positive action.

May the new year bring you unexpected opportunities for joy and ample rewards for your efforts.

Renovation, cabinet building and woodworking plans and tutorials. Build like a Girl®