World Peace Will Have to Wait 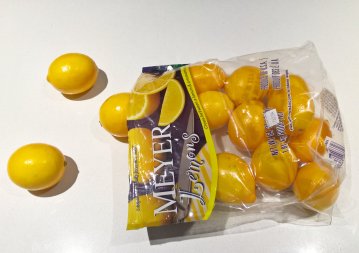 World Peace Cookies, that is. I was all set to bake those but got distracted by a big bag of sharp, bitter, and tart. Costco had Meyer lemons on special. I’ve wanted to cook with them, and now I’ll get plenty of practice.

Since the hubs doesn’t like lemon in savory dishes, tangy desserts it is.

I don’t cook with citrus fruit often and had forgotten the lovely mess one can make. All. those. seeds! The rasp is normally employed for grating parmesan so zesting proved no problem. But we have nothing even vaguely resembling a citrus reamer or juicer. Brute force had to suffice. 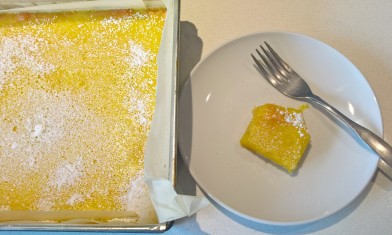 The recipe was specifically for Meyer lemons; found it on Epicurious. Good thing it called for 3/4 cup lemon juice – three lemons down, a dozen or so to go! The result is quite tangy, the flavor much deeper than had I followed the recipe in a mundane cookbook which called for a mere 3 Tablespoons of lemon juice. Why bother?

Soon I’ll get back to world peace, once we’ve gotten through the sharp, tart, and bitter of winter.