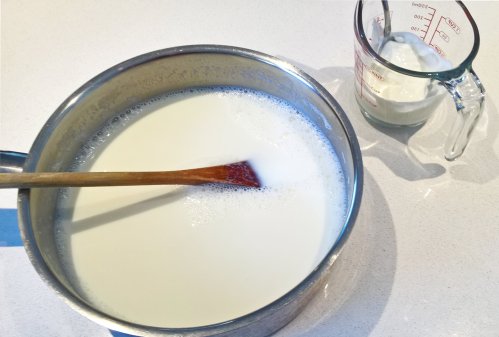 For quite some time, must be at least seven or eight years, I’ve been making our yogurt. Two reasons: purity and plastic. The homemade stuff doesn’t have any of the additives of commercial yogurt. Or at least very little since every couple dozen batches or so I use the store-bought stuff as starter. And when I realized not buying yogurt was a reasonable way to reduce plastic consumption, well, that sold me on the effort.

And it’s not a lot of effort, but it is a commitment. Now that I’m back in the workforce, I’m also back in the time-juggling game. The hubs offered to make yogurt, and after all this time, I relented. Yogurt-making was on the TTHSND list: Things The Hubs Should Not Do. The list started early in our marriage when he offered to do laundry and tossed in my one silk blouse. . . In this case, I anticipated the task bouncing back to me or becoming a point of contention. Since I’ve been doing this for so long, even when working, that it didn’t seem worth the effort.

There is also TTTHDDWBICTI list: The Things The Hubs Doesn’t Do Well But I Choose To Ignore. Topping that list is vacuuming. He does the open areas and, if the mood strikes, gets under a few things but has long since foregone vacuuming the furniture. He’ll break down if he sees one of the dogs ‘hunting’ for pretzels sticks and popcorn between/under the cushions but otherwise he does not put forth the effort. I choose to ignore this oversight as the only other option is for me to do the vacuuming. When necessary, I employ my mother’s housekeeping coping mechanism: I take off my glasses. It’s amazing what you can’t see, and therefore what you can abide, without glasses.

Anyway, back to the yogurt. Initially, I ran through the process with him as I made yogurt, and a day later he asked me to list the steps again as he took notes. A few days later, he gave it a go, sending me a proud text when his first batch was in the yogurt maker.

Mind you, I’ve only been working two weeks and two days. But we eat yogurt for breakfast most days, weekends included. And even though we split one jar, the yogurt maker only holds five jars: The math is pretty straightforward. Oh, and I used one jar in a cake. That’s when it (already) became too much. When I said, Oh, time to make yogurt again, the look of surprise and exasperation on his face was as exaggerated as a silent-movie actor’s. Yes, it’s a commitment. So I made the yogurt. But I will vacuum only in a state of emergency. And I haven’t got a clue where my glasses are.